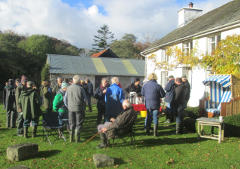 Philip and Hilary Thornely are an academic couple and it goes without saying that they apply academic principles to their sheep keeping. Meticulous records have been kept for the past 30+ years allowing them to breed for desirable traits of prolificacy, worm resistance, comparision of different terminal sires and the performance of the Llanwenog vs the Lleyn.

On the morning of this year’s AGM, on November 5th, over 40 members and friends were taken around the Newgate Flock of Philip and Hilary Thornely in the Aeron Valley, a few miles inland from Aberaeron (recently voted Wales’ most popular town).

In glorious Autumnal sunshine we were welcomed on arrival with refreshments overlooking a picturesque stream in front of the house. We were then taken around groups of sheep in different fields with an abundance of grass and sheltered hedgerows that were dominated by some very mature oak trees, an indication of the fecundity of this valley.

Philip and Hilary purchased the farm in 1972 and realising the good climatic condition for growing grass decided to establish a flock of the local Llanwenog breed, renowned for being a prolific, easy lambing and milky breed. Females were originally purchased from the Tynlofft, Brynsegur and Dolmaen flocks with significant additions later from the nearby Cwmere flock that won the British National Lambing Competition on several occasions.

Meticulous records have been maintained from the outset with all ewes and lambs weighed on weaning day – profitability being relative to the combined weight of the lambs. Ram lambs from ewes having bred twins successfully over several years have been used and sold to other breeders.

A true grassland flock, the majority of the lambs are finished on grass and the advantages of EID have become very apparent – with individual weight and grades as well as any fluke infestation. Philip has also participated in Worm Resistant Testing and fearing future resistance to some group of drenches will not breed from any sheep requiring regular dagging.

The easy lambing trait of the breed was praised and any terminal sire used has to have a small narrow head and if possible with performance records. A Roussin sire is used on the ewe lambs and this year an Easyram New Zealand Suffolk is being used.

Lamb loses now around 4% between tagging and sales halved since Hilary has retired from other work and has been able to spend more time helping on the farm.

A hearty lunch awaited everyone, with a delicious soup and sandwiches followed by Welsh cakes and bara brith, in the library.

After lunch members travelled down the valley to the relatively new vineyard at Llaethliw – a name according to some literary experts that translates to ‘Milkwood’ and inspired Dylan Thomas’ play for voices ‘Under Milk Wood’ when he lived in the Aeron Valley. We were treated to some white, red and rose wine after a tour of the vineyard.

The Secretary, Delyth Williams then invited members to the Breed office for an eye-opening explanation on the advantages of using the Grassroots system. We left knowing that the Breed was in good hands and prepared for the AGM. After a successful AGM the dinner was held at Gorsgoch followed by the announcement of the flock competition results with comments by the judge, Maurice Greenslade and the results of the flockmaster competition.