Philip Hodges has been breeding, actively promoting and showing Llanwenogs since the 70s with considerable success. He is an avid supporter of traditional breeds and a well respected judge making him much in demand up and down the country in the show rings. A visit to the award winning Charndon flock is a treat not to be missed.

Nearly 20 members left the hay-making and gathered at the Red Lion pub in Stratton Audley near Bicester for the 2015 Llanwenog Breeders Support Group AGM. The admin problems at the Society were raised as members have not received ram registrations etc. A new secretary is in place and everyone is well aware of the task facing her, we wish Delyth well in her job. It was decided to award trophies at the Melton Mowbray show and sale (11th and 12th September), please enter sheep if you can. This is a major sale of Rare Breeds and an excellent opportunity to sell to people new to the breed. 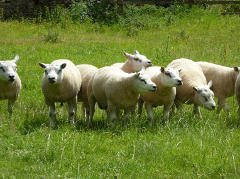 After a sandwich lunch at the pub our first stop on a tour of the Charndon flock was some rams for sale just down the road from the pub. A puzzled neighbour driving past stopped to ask what we were all doing – the idea of looking at sheep seemed quite novel. In addition to Llanwenogs Philip also has Beltex, White-Faced Woodlands and Ryelands. We then had a chance to see his Beltex rams, descendents of the first 4 ewes he got from Belgium. He puts these on the Llanwenog and gets a lamb ready for the butcher in approximately 12 weeks, some of the ewes are retained for breeding. We also saw some of his Beltex ewes and lambs – fine stocky animals. Next stop was a group of yearling Beltex ewes who put on a remarkable show of jumping to escape the Ha-ha but fortunatelythey managed to jump back again. 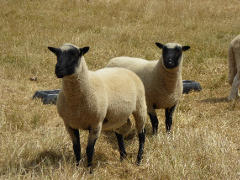 Driving a bit further down the road we came to his Llanwenog flock and admired 3 rams from different lines in the Charndon flock. The next field had a group of ewes and lambs with some very fine animals and finally a group of beautiful yearling ewes including a few White-faced Woodlands and a couple of Ryelands. Philip retains his ewes as breeding replacements but I would certainly have been very happy to take any of them home. He has been breeding Llanwenogs for over 40 years and his hard work has certainly paid off with sheep that are a credit to him. He explained that when he started he saw no reason why the Llanwenog shouldn’t become one of the main breeds used for lamb production in this country but unfortunately the Welsh mule has taken over and the Llanwenog remains a minority breed. There are a number of commercial flocks but we are almost in a chicken-and-egg situation – it’s difficult to buy Llanwenogs in bulk but if we breed large numbers of breeding ewes there needs to be a market for them. 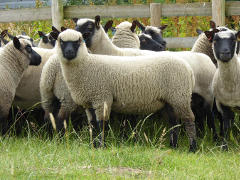 The day was rounded off with a barbeque kindly hosted by Philip and Sally and a chance to sit and chat to other members we don’t see very often. Our very sincere thanks to Philip and Sally for all their hard work involved in giving us such a great day.