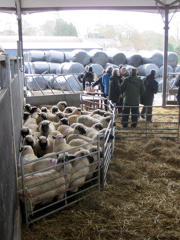 Jack Cockburn is one of our more entrepreneurial members. Llanwenogs and Traditional Herefords are farmed organically with state of the art livestock units. The traditional farm buildings are all converted providing a Training Venue and Holiday Cottages. The latest development are the award winning Hobbit houses. What next?

Our autumn flock visit in Ceredigion began quite appropriately under one of the largest "umbrellas" in Wales - Jack Cockburn's circular livestock unit at Tyglyn, Ciliau Aeron in the beautiful Vale of Aeron. After our cups of coffee, Jack outlined his organic farming operation - a herd of Traditional Hereford sucklers and a flock of mainly Llanwenog ewes spread over four separate blocks of land now totaling 170 traditional acres. Efficient winter housing has been the basis of the expansion since we last came here in 2007, the feeding and bedding routine can now be completed in a fraction of the time.

The Herefords are all pedigree and the best 15 cows are put to his Traditional bull but the rest are served by a larger framed Canadian Hereford. Apart from the occasional sale of bulls for breeding Jack markets his cattle through a linked farm shop in Redditch, Worcestershire. 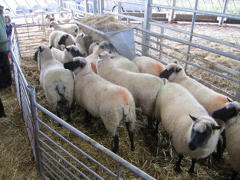 About half of his 120 ewes are Llanwenog, a proportion he wants to increase. Ewe lamb replacements are selected from twinning ewes that have been able to wean at least their own bodyweight and Llanwenog rams likewise have been selected, where possible, on the basis of their dams? records. When we moved up to Treberfedd, Dihewyd we saw a group of ewes running with a yearling Llanwenog ram out of 6 year old ewe that weighed about 60kg, which had weaned at least 70kg of lamb off grass alone for 4 years in succession. Could we identify other ewes in the breed that are this productive? 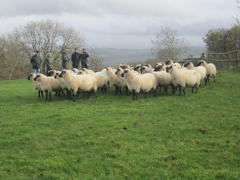 The farm at Treberfedd, perching dramatically above the Vale with terrific views to the mountains, has been developed as a conference centre with accommodation initially in four cottages (one thatched) with this autumn's addition of three grass-roofed Hobbit houses for people who enjoy that sort of thing. Fortunately for Jack, the judges of a recent national competition did and Treberfedd won the award “Best Organic Place to Stay”. But will the turf roof qualify for Single Farm Payment? Look at theTreberfedd website for the full story. 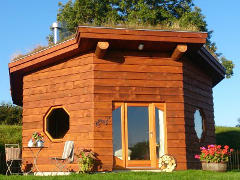 We rounded off the morning in the centre's cosy restaurant with a delicious Hereford beef stew, and cakes. Many thanks to Jack and Elinor and their three daughters for entertaining us so generously.