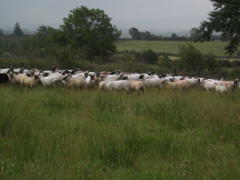 The Tomkins farm in a remote part of Cumbria and run a thriving catering business providing home reared beef, lamb and pork. Their liveried vehicle can be seen at local Farmers Markets and produce is also sold at a nearby Farm shop. Llanwenogs are crossed with Charollais and bred pure.

A warm welcome along with coffee and shortbread greeted those members who found their way to Haggbeck, Carlisle and the home of Andrew and Helen Tomkins and their family (Hallsford Flock 274). A few miles further and we’d become the ‘Scottish breeders support group’ and Andrew explained a bit about the fascinating History of the “disputed lands”, the notorious Border Reivers (the lawless clans of the border valleys, where a lifestyle of raiding cattle and goods from your neighbours was the only way to survive in Elizabethan times) and as a result of this torment the Bastle house – a simple fortified farmhouse with thick walls and space for the animals downstairs. 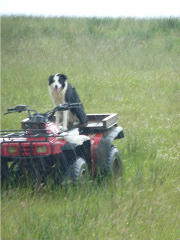 The sun shone as we gathered and chatted but just as we set off to see Andrew’s flock we were treated to a sudden downpour. The sheep could be seen heading off for shelter and were not best pleased to be rounded up for our inspection. This is not fell country but upland grazing and Andrew explained how he had chosen the Llanwenog as he thought it would suit the land very well thriving on the rougher grazing and needing little extra input. He would very much like to increase his flock but cannot buy in enough extra purebred ewes locally so has bred his own, resulting in a mix of pure Llanwenog, Charollais and Hampshire Down crosses, which also do well on his grazing and produce a good lamb for his mail-order meat business.

After a magnificent lunch of Hallsford beef and pork followed by delicious local cheeses we settled down to the main business of the day – the AGM. 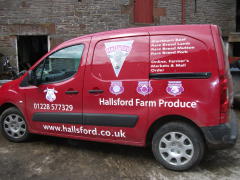 Later, umbrellas away, we were shown the herd of beef Shorthorn cattle which were also chosen for their ability to thrive on Andrew’s pasture with little extra input. The business also sells pork, mostly Gloucester Old Spots and our tour finished with a look at some weaners and a couple of sows about to farrow.

Our thanks must go to the Tomkins family for taking the time and care to host the AGM. We all appreciated their hospitality

Andrew Tomkins is quoted in some of our marketing literature

Llanwenogs are ideal as a commercial flock on a 'half way up the hill farm'. A medium sized and prolific breed, they are cost effective and exceptionally hardy. Their longevity often surprises other farmers. We breed pure bred replacements and cross the remainder with Charollais Tups producing a fast growing finished lamb. The quality and flavour of the meat is often remarked upon by our customers. Having run these as a commercial flock for 15 years we would have no hesitation in recommending them