Jonathan Crump is renown in the area for his fine Gloucester cheese. He farms in a beautiful valley high above Stroud and together with his Gloucester cattle, he runs a mixed flock of rare breed sheep, including the Llanwenog.

Jonathan Crump recently hosted a farm walk for the RBST Gloucestershire group and a few of us gate crashed to have a peak at the newly established Llanwenog flock. Last Autumn, Jonathan snapped up some bargains at Llanybydder and together with some top ups from the Worcester sale, has returned to the breed after 12 years.

He is planning to compare the prolificacy of the Llanwenog Vs the Lleyn and hoping to recapture his previous lambing experience of 200%. The best ewes were bred pure and we saw only a small sample of the flock amongst a sea of Jacobs, Cotswolds and Castlemilk Moorits. 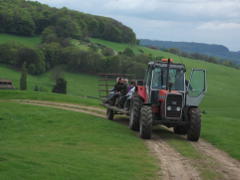 There were some steep banks on some of the fields which challenged the vehicles pulling their heavily laden passenger trailers but the views were magnificent as we passed the Gloucester cattle peacefully grazing the banks and pigs free ranging in the meadows, high above Stroud we had stunning views over the River Severn and Vale of Gloucester. 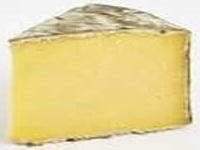 We also sampled some delicious Single and Double Gloucester cheese which Jonathon makes exclusively from the milk of his Gloucester cows.