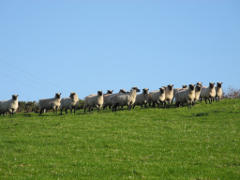 Alun and Rebecca Evans' farm overlooks the Preseli Mountains and Cardigan bay in Ceredigion. They run a small pure bred flock and have links with the Llanwenog going back to the establishment of the breed. Alun has a passion for historic farm machinery and the farm houses the local museum's collection of vintage farm equipment.

Alun & Rebecca Evans’ immaculate Organic farm overlooks the Preseli Mountains and Cardigan Bay. Preseli Blue stones were used in the building of Stonehenge and it is mind boggling to imagine how on earth they managed to transport the giant boulders on such an epic journey 5000 years ago.

The farm at Cwm March (flock 248) is in Tir Gofal & Organic environment scheme and consists of 40 acres of high quality permanent pasture on sandy soil. The farm used to have cattle but due to the constant requirement for TB testing this enterprise has stopped. Now there are two flocks of sheep, the Llanwenog and Suffolk. Numbers are reduced this year from 80 breeding ewes – the ground being capable of supporting 2 ewes per acre- to 20 Llanwenog ewes & 7 ewe lambs and 23 Suffolk ewes & 6 lambs.

Back in the early days after the establishment of the Llanwenog breed, Alun told us of his pride and joy of being allowed to go with his uncle - David Evans - Huw's father (flock No 1- Alltgoch) and accompanied by Enoch Evans (flock101 - Parc y Rhos) to various local shows in the county. The interest in Llanwenog Sheep was kindled and he has remained loyal to them since. The flock ewes & lambs were much admired – and a young Kelpie Cross sheepdog gave us a demo of her natural abilities! 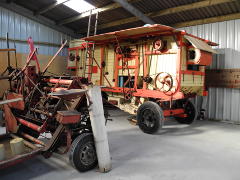 Also on the farm were some Welsh Cobs and an intriguing hay pulley system on the roof of the Dutch barn –triggering much speculation as to how the system worked. Vintage Agricultural equipment was also on display for us to wander around while we enjoyed our welcome refreshments and lunch. The machinery forms part of the Cardigan & District Agricultural and Maritime Museum collection - clearly a passionate hobby for Alun with a barn dedicated to their keep and all items in full working order. The Binder and Threshing machine had made an outing this year and both were working as part of the Vintage Working Day in August and a few of our group recalled seeing such machines in operation during their childhood. There was also a tour of the converted original farm house on the site believed to date back to 16th C.