The Bridgwater Llanwenog flock at Cannington College, Somerset was established to compare the performance of a Native breed against the College's existing commercial flock (Texel Crosses). This provides an additional teaching project for Agricultural students and a valuable set of independent performance statistics for the Society. We look forward to the results in due course.

On a sunny Saturday May 12th Llanwenog breeders from across England & Wales met at Rodway Farm, Cannington for their traditional spring flock visit by kind invitation of Mr. Steve Jones (Farm Manager). This was their first opportunity to view the new Llanwenog flock established in partnership with Bridgwater College & to discuss its future direction.

The flock was established during August 2011 with the purchase of 42 ewes in flock ages from the Langley (M. Greenslade, Wiveliscombe) & Nell (C. Horton, Cirencester) flocks. The farming system at Rodway provides an ideal environment for sheep to flourish as there is always an abundance of clean aftermath grazing available. The Llanwenogs responded accordingly & by the time they were put to a Charollais ram on October 18th , they were all in excellent condition & their inherent docility & good conformation were evident. 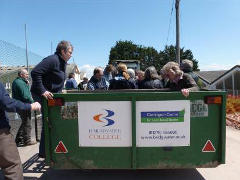 The visit started with a lively discussion led by Steve Jones & Martin Heal (IT/Farm Management Lecturer) about progress to date, potential outcomes of the project & issues that had arisen. Martin Heal explained the computerised flock recording system now in place consisting of a stand-alone electronic tag reader with memory & hand held computer both downloadable to accompanying computer software. This would allow for easy recording of all physical & financial performance with selected data being able to be accessed readily. In this way the Llanwenog flock could be compared with the existing Texel cross flock already on the farm & other comparative trial work could be undertaken. Society members emphasised the importance to them of being able to obtain independent data about the breed & that any comparison with the existing flock should include a comparison of stocking rates achieved & hence profit per acre which ultimately is the all important figure. As with any new flock there is a learning curve & views were exchanged about the correct housing period prior to lambing, diet density during the housing period, reduction of losses at lambing & the choice of ram breed. In respect of the latter Steve Jones suggested that a Texel ram might be better for the Llanwenogs but this could be resolved by increasing the flock size to 60 & putting 30 each to the Charolais & Texel as a comparative trial. In any event a larger flock would mean any results would be more reliable.

On moving outside Martin Heal gave a live demonstration using the tag reader & emphasised that for any number of sheep they needed to be run through a race. To read a tag takes about five seconds so effective control of the sheep is necessary. The system used had been chosen for its potential robustness & would be evaluated over a number of years. 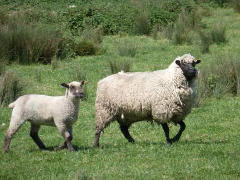 And finally on to seeing the sheep themselves. Llanwenogs & their Charollais cross lambs were running alongside the existing Texel cross ewes & their Texel sired lambs. The former certainly compared very favourably with the latter & this was born out by average lamb weights at 50 days with lambs from Llanwenogs being about one kilo heavier.

Our thanks are due to Steve Jones & Martin Heal for laying on a well organised & informative visit. The society looks forward to the information that will flow from this