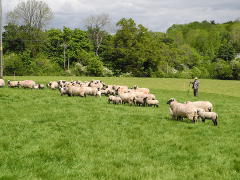 Lawrence Jones' flock is on the edge of Dartmoor National Park. It is a commercial flock and Lawrence crosses the Llanwenog with Beltex to produce supermarket export grade carcasses and regularly wins Butchers' lambs classes at his local shows.

Arriving in the beautiful Devon village of South Tawton, our visit coincided with the monthly craft market. Naturally this demanded our attention as well as a pint or two - before we got stuck into the main event. Our hosts were Lawrence & Sue Jones (Blackhall Flock 380) and as well as a number of local Llanwenog breeders, members had travelled from Wales and the Midlands.

The Jones’ farm on the Northern edge of Dartmoor and their ground has been in the Dartmoor National Park ESA scheme for 20 yrs (expiring 2014). Evidence of the agri environmental scheme were to be seen in some beautifully laid Devon hedges, however, the strict pasture management prescriptions have reduced the productivity of the pasture – which was a declared source of frustration. That said, Lawrence manages to over winter the ewes on the farm; the Llanwenog being sufficiently thrifty to find adequate grazing without the need for supplementary roughage. Concentrates are introduced in the run up to lambing.

The flock consists exclusively of Llanwenog ewes (106) with 65% pure bred and the rest crossed with the Beltex. This cross has been used for a number of years and produces an ideal supermarket sized lamb. Lawrence settled on the Llanwenog after seeing the breed at the Royal Cornwall Show. His spec. was for a versatile, medium sized ewe which had the ability to compete commercially and would lamb easily. Last year the ewes scanned at 165%.

Lawrence had been hard at work before our visit, still at the tail end of lambing; he had shorn the 48 flock replacement yearlings so that they looked smart and ready for inspection. These were marked to demonstrate the effect of three different stock rams. The farm walk concluded in the barn with a challenge to select the best ram and most suitable ewe & lambs for the stand at the NSA sheep South West show in June. I’m not sure whether he managed to extract a straight answer but it is always a treat to see a pen of 8 strong rams and hear about their breeding and performance.