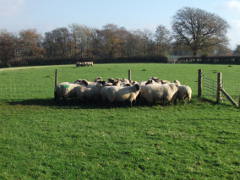 The Ebbsworth Family run a small pure bred flock of quality and inspite of busy working lives, they can be seen regularly in the show rings around Ceredigion and at the Royal Welsh show.

Pete was asked to write an account about how he got started with the Llanwenog - you can read his report here .

On a glorious sunny autumn morning, well over 30 members convened at Cae Main, Llanwnnen, home of the flock of Mr Pete Ebbsworth and family. As expected, a warm welcome was received, with refreshments including Bara Brith and Welsh Cakes, which were appreciated by all. Mr Ebbsworth gave a very informative and heartfelt welcoming speech which gave members an insight as to why he started keeping Llanwenog Sheep some 7 years ago, having been Chauffeur for Mr Huw Evans, Alltgoch Flock, as he went on his rounds judging the Flock Competition. Since then, the flock has developed significantly, with rosettes being won not only in the local shows, but also at prestigious events such as the Royal Welsh Show. Mr Ebbsworth thanked his friends present who have helped him along the way and given him support and advice whenever it has been needed. 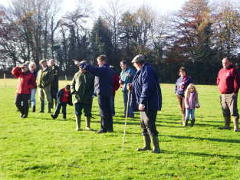 We then went on to view the flock, seeing the ewes and rams first, followed by the ewe lambs. During the visit, Mr Ebbsworth kept all present well entertained with his informative and witty interjections. Having initially been apprehensive about the flock visit, he went on to say that he hoped that more members would now consider having visits to their flocks, and that by seeing what he has been able to accomplish over a relatively short period of time, they would then in turn be inspired to have a go and do the same. Thank you to Pete and the family for their hospitality and warm Welsh welcome.